The accessibility of the location of Baliwag in Bulacan is one of the highlights to the new development by Robinsons Homes – Brighton Baliwag. This project is located in Sta. Barbara in Baliwag. It is located within close proximity to many establishments such as schools, markets, malls, and other businesses. Thus, you can save time in your travel if you need to do some errands, go to school or report for work. Brighton Baliwag is also easy to get to; in fact, it is only a 45-minute drive once you reach the Balintawak Exit (NLEX).

The city of Baliwag is a first-class municipality in the province of Bulacan. The population of the city is less than 200,000 (as of 2015). However, the rapid growth and development in the city, as well as more people realizing the potential of the city, it is expected that there will be more residential projects to be developed at the city. This will help to grow the population count and also open more opportunities like employment and businesses.

During the years of being under the Spanish rule, Baliwag is a predominantly agricultural city. Rice farming was the major source of living for the people who lived here. Most of the harvests are the sold in the local markets and the city developed sustainability that way. But was Metro Manila is being expanded, provinces within the CALABARZON region are going to experience the highest level of development and expansion. Moreover, there are also lots of people that are interested in living outside of Metro Manila so they can be away from the stress and chaos.

From its years of agriculture, there are now a wide range of industries that operate in Baliwag, Bulacan. The industries that support the city’s economy include food and food processing industry, automobile, livestock production, furniture, and more. These industries operating in the city also mean that there are plenty of job opportunities for the locals, too.

Aside from the job opportunities and economic development, there are plenty of nearby establishments that can meet the needs of the future residents in Brighton Baliwag. There are plenty of good schools in the city such as St. Mary’s College of Baliuag, Baliuag University, STI College Baliuag Campus, Asian Institute of Computer Studies, and more. Aside from the city being quite accessible, there are also several transport systems that operate within the area. One example is the Baliwag Transit, Inc. It is one of the country’s largest bus systems and they operate in three major transport lines in the city.

When it comes to recreational opportunities, you won’t need to go to the major cities in Metro Manila. The homeowners at Brighton Baliwag will have plenty to choose from. There are malls and shopping centers like SM City Baliwag, Savemore Supermarket, A Square, and Puregold Baliuag. You can also add the following tourist attractions in the city: 3006 Augustine Square, Baliwag Night Market, The Baliwag Star Arena, Baliuag Glorietta Park, Artisan Street, and Baliuag Museum and Library. 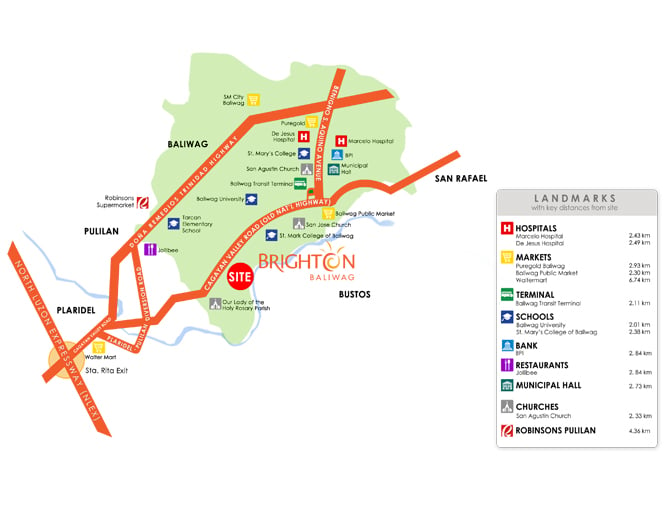